I can’t believe that April is nearly at an end.  In a month that saw prep work for THE BIG EVENT in less than three weeks, and the NCPH conference in Pensacola I also had a quick, mini-vacation in Scottsdale, Arizona.  While we spent a good amount of time by the pool enjoying the warmth (it was still very chilly in DC, something that is no longer the case) there was an opportunity for some good eats, hiking, and a moment to take in a historic house tour.

I’ll be honest and say that this trip had an agenda–it was my sisters bachelorette party–and the goal was relax, relax, relax. So while we did take a lovely hike up Camelback mountain (you can see me in the slideshow sporting my PreservationNation.org shirt) the rest of the time pretty much just involved….

While in Scottsdale we ate at a lot of places. I did want to take a second to mention that as great as the food at Deseo was , the private mixology class where we learned how to make three different types of mohitos was fascinating–historically speaking of course. The instructor gave us a brief history of the drink and explained the different variations of rum and how they are developed. From some of the courses I took on foodways I remember thinking about the different regions of the world that make the liquor and how the histories of those nations were affected and transformed by production.  Specifically the history of sugar and the slave trade. If you want a really good book about the subject check out Sydney Mintz’s work Sweetness and Power: The Place of Sugar in Modern History.

We also ate at…

In addition to perfect weather, this restaurant had amazing southwestern/Mexican cuisine.  Built from a 75 year old Adobe, diners at the Old Town Tortilla Factory sit in the open air.  I would recommend getting the green enchiladas.

Brunch at Cafe Zu Zu was the perfect way to start our leisure filled Saturday. It also gave me an excuse to visit a very chic modernist hotel (part of the Historic Hotels of America collection). With awesome chandeliers, and a pretty trendy lobby–I thoroughly enjoyed my french toast.  If you love mid-century modernist hotels I recommend visiting the Valley Ho–or just read about its past. 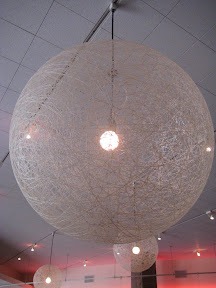 Our first stop when we landed was getting some food at Olive and Ivy. Despite it being the hottest day of the year (so far) in the area, we decided to sit outside. While we tried a lot of different food–the Sweet Corn and Tomato Flatbread was (to me at least) the star of the meal.

And Now for the History: Taliesin West

Earlier this week I posted this post over at PreservationNation about the perfect house tour. It stemmed from my general dissatisfaction of a tour I had received at Taliesin West. I wanted to elaborate on this a little. For me the typical house tour is symbolic of a time when great men dominated our history lessons. So while many tours work very hard to look “downstairs” or interpret slave quarters occasionally you get to a tour that hasn’t quite made the leap.

Now of course, the difference with Taliesin West is its connection to Frank Lloyd Wright and his influence on American architecture–but the same principals apply. Instead of trying so hard to convince the captive audience of his greatness, the tour may have been better if his concepts and ideas were relayed narratively, using the house and the school to illustrate the points.  Instead, as an audience member, the conversation felt a little condescending. Rather than talk about the school in a way that talked curriculum and how it uses Wright”s vision to train new architects, we got discussions of accreditation and how many students are accepted. It felt, at times, much like an advertisement for applicants rather than a  story of Wright’s legacy–continuing on beyond his lifetime.  I am willing to concede, as I mention in the post above, that the temperature may have contributed to the ineffectiveness of our guide–or that it was a particular off day–but when you feel like the hour long tour could have been concluded in half the time, there is a problem.

The tour aside, if you do have a  chance to visit this masterpiece do so. Every angle produces a new vision — of sky, water, stone against Arizona’s natural landscape. A is for Arizona–which means it was absolutely amazing.

Note: Speaking of historic moments. While we were in AZ, some of the party attendees stayed up all night to watch the final cricket match of the cricket world cup between India and Sri Lanka. At this moment the Indian team was playing against a team that had dominated the series, while they had fought tooth and nail to make it to the end. It was a team that had not made the finals since the year I was born (1982). While very much an important part of Indian culture, I found myself unexpectedly caught up in witnessing the exciting win–and felt like I was a part of a nationwide moment of joy. So I say Bravo India!

View the full album of pictures.