Excerpt from the final scenes of Mulgrave Manor:

DAVIS (shaking his head): When we really first met. We were in London they had just announced the end of the war and you were there taking care of Lady Weschester….that night…it changed my life. It gave it meaning.

S. HARROW (shaking her head violently): We talked. Nothing more. You’re reading into it too much–what about Lady Victoria.

DAVIS: Damn Victoria! It is you that I love. 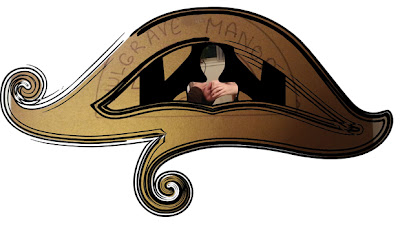 The invitations were sent. The silver polished. Footman stood at the ready for one of the finest soirée’s Buckinghamshire had ever known. All that was left was for the director to call action.

For the last two years I’ve participated in a murder mystery club. It started with a friend’s birthday party which was set in the 1920’s–your typical murder mystery out of a box with villains, heroes, heroines and of course……murrrrrrrrder.

Somewhere along the way three of us started to write the mysteries ourselves, taking a gander at figuring out motive, means, opportunity and a gaggle of red herrings to confuse and bewilder our guests. In the past these investigative forays took place in the Wild West, the land of fairy tales or at an intergalactic peace accord signing (guess who wrote that one). For this spring’s adventure I embraced my love of pop culture, gossip and history and set the tale on the set of a Downton Abbey rip-off called Mulgrave Manor.

On April 19 the period drama Mulgrave Manor will be shooting the final scene of its first season. Following the shoot there will be a party to celebrate the show’s successful renewal despite being panned by critics as a poor-man’s Downton Abbey. Everyone arrives at the shoot having just heard from their publicists or TMZ that not only is there a secret love affair on set, but that hot-off-the presses from Entertainment Weekly there is a last minute change to the script for tonight’s episode….

Initially I wanted to set the mystery at a big house after World War I, but quickly realized that it would be more fun to poke at the Edwardian drama that everyone loves so much–after all despite all that Downton Abbey does right, this last season veered further into the melodrama than ever before.

That being said, part of the reason I love the show is how the home plays such an integral role in understanding aristocratic life–where divisions between upstairs and downstairs in post-war England began blurring with new opportunities. It’s such a great and public way to engage with the past.

However, for the party, I focused on the characters giving each one different layers and back story that would help our detective solve the crime.

In this case the victim was Assistant Director Miriam Maxwell, who meets the wrong side of a silver platter at the wrap party for the first season of Mulgrave Manor. The cast has just finished filming the last scenes (following an unexpected script change) and are bracing for what is to come. 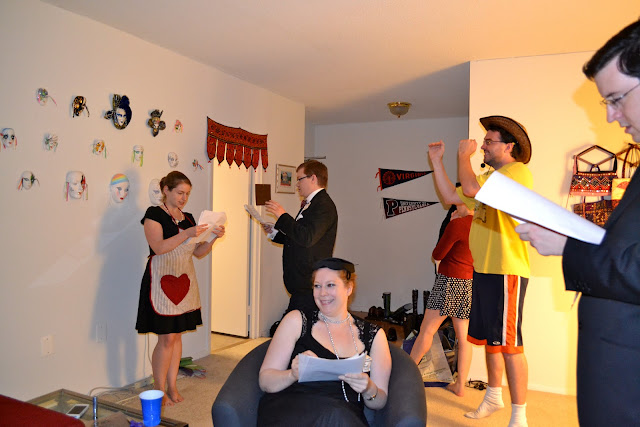 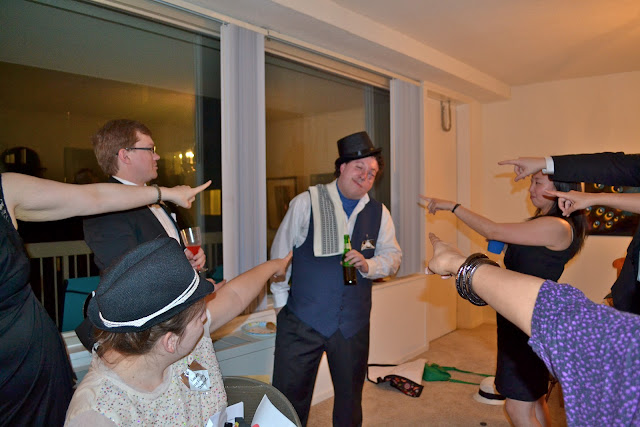 I’d like to say my extensive knowledge (extensive? Not really!) of Edwardian England made this a ridiculously accurate murder mystery. In reality, in an effort to mock and parody, accuracy didn’t really matter. Instead it was the challenge of storytelling that involved a play within a play, and live actors ad-libbing their back stories in real time.

Setting: The Dining Room of Mulgrave Manor. The table has been set, and Thomas Harrow enters carrying a silver tray. He places it on the sideboard before taking his place along the wall. Mr. Cosgrove enters examines the table, using his ruler to measure the distance between plates. He looks up and sees Mr. Harrow waiting.

COSGROVE: Thank you for filling in this evening. Young Marks is ill and unable to fulfill his footman duties.

T. HARROW (tilts his head): Whatever you need Mr. Cosgrove. He watches warily as Cosgrove continues to inspect the table.

COSGROVE (adjusting some of the silverware): Did you measure before you set the silver?

T. HARROW: I did sir

COSGROVE: Hmm. (He swipes the candlesticks for dust, and rubs his fingers together. Shaking his head).

T. HARROW: Are we expecting Lord West to return tonight?

COSGROVE (harumping): We expected Lord West whenever Lord West sees fit to arrive, as is his right. It is our duty to be prepared for his arrival. (He straightens). Very well. Please ring the dinner bell.

~~~~
| Read the character sketches and plot | Read the full script |

One thought on “Damn, Victoria! History, Mystery and Whodunnit”