Objects take on greater meaning when they are at specific place at a specific time. In aggregate they help paint the broader pic. #docsocial

Watching #warehouse13. Mrs. Fredrick just said that the “creation of an artifact is the meeting of an object, person and a moment.” #truth.

A few weeks ago I attended a tweetup between the National Museum of American History and the United States Holocaust Memorial Museum. Using the hashtag #docsocial twenty social media users gathered to look at the role of documents and primary sources in the telling of history.

The objects central to the program were handbags–purses belonging to two women held at Terezin, a camp located in Czechoslovakia that was used as a “model/propoganda” camp. 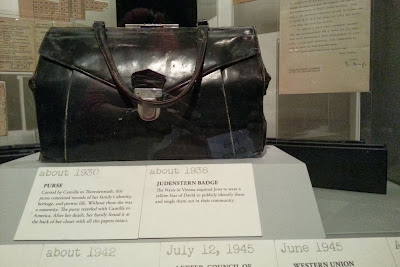 The first belonged to a seamstress, Camilla Gottlieb, and is part of an exhibition at the National Museum of American History called “Camilla’s Purse”. The documents and objects within tell the story of her life at Terezin and later in the United States. The second purse, at the Holocaust Museum, belonged to Helene Reik, who died in the camp–her purse survived because a cousin saved it. Within the handbag was the expected and unexpected: a manicure set, scraps of receipts, and photographs Helene had used as paper, filling every available white space with words. 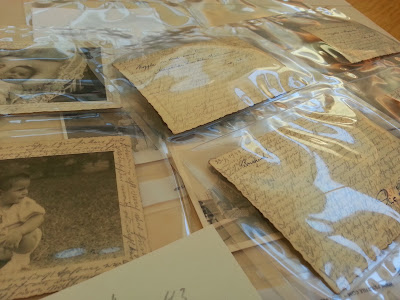 On Friday I saw the George Clooney film The Monuments Men, which in its mediocrity reminded me of the anonymity of the ordinary. At one point in the movie Matt Damon is taken into a warehouse where the belongings of deported French Jews are sorted and cataloged based on type and taxonomy. The pitchers sit in one corner and the chairs stacked together in another. The sheer volume of the furniture, silverware, and art in one place, sans context and homes gives us a tangible link to the collective, but keeps us removed from the individual lives that owned them. They mean something in the broader context, but are filled with spaces and silences where names, faces, and souls belong.

In their very survival, these two handbags restore power to the individual, stripping away the Nazi ideology and its twisted perceptions of the Jewish race. They give us back the lives of Camilla and Helene and provide a touchstone and a reminder of the ordinary amidst terrible times. Of life beyond uncontrollable circumstances.

In a recent piece on the Preservation Leadership Forum blog (part of his Why Old Places Matter series), Tom Mayes wrote the following about individual identity.

Although our identity with place changes over time (and can be re-created in different places), the places that form our identity act as “tangible objects” that support our identity. Our old places—if they continue to exist—serve as reference points for measuring, refreshing, and recalibrating our identity over time. They are literally the landmarks of our identity.

While not “places”, these two purses and the objects and documents they contained are “reference points” not only for Camilla and Helene’s family, but also for those of us looking to remember and understand a period in history which destroyed the lives of so many.

In this the ordinary becomes extraordinary. 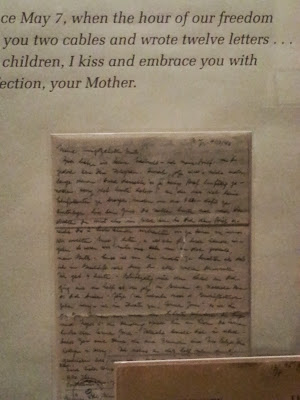 In the first a translator is working on some of Camilla’s documents and letters. In one letter he reads about a seder that Camilla attended after liberation where American soldiers served food and took care of survivors. A veteran of World War II the translator realizes that he was there.

At the Holocaust Memorial Musem, curator, Kyra Schu told us the story of one of her favorite objects, a monkey puppet that was used by a soldier during liberation of the same camp where the woman was. One day she shows the video to a survivor (who was a small child at liberation), and as the camera pans the crowd Kyra realizes that the woman, and her mother are in that video watching Kiki the monkey puppet. This is the first glimpse the survivor has of herself under the age of three.

And finally, we’ll end with the beginning. At the start of our tweetup participants began with their own migration stories. As my co-workers and I walked home we found ourselves talking about that moment and how it made us think about our pasts, our personal histories including and about those objects that trigger memories and make connections. 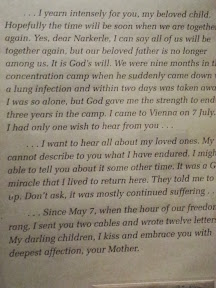 One of my co-workers, Diana, gave me one more example:

My grandma’s Pyrex bowls. She had a set of nesting glass Pyrex bowls in multiple colors–the largest was a light sky blue, then yellow, green, and red.

I was lucky to grow up living in the same house as my grandparents, and grandma would feed us dinner on Monday nights when my mom would work late. I can remember that beautiful blue bowl being a part of dinners so many times- holding bubbling scalloped potatoes and ham, or crisp green salads. Grandma grew up during the depression, so I think it was always a great sign of love to provide us with delicious, home cooked meals.

The bowls to many people would just look like old bowls, but to me, they are extraordinary, just like Camilla’s purse was an ordinary object except for the stories it had gone through. Grandma grew up in that house, on that farm, and learned from her mother to provide for her family, which started with my dad and uncles and continued on to my brother, cousins, and me. Every meal I ate I could feel that knowledge, love, and history, passed down. Surely Camilla didn’t buy her handbag expecting it to someday be on display at a museum halfway around the world. But it is, and tells such an incredible story of one family among many.

A document, a puppet, and Pyrex bowls. Ordinary. Extraordinary.

Camilla’s Purse is open at the National Museum of American History through May 4, 2014. The United States Holocaust Memorial Museum is open 10-5:20 daily.

Quick Review of The Monuments Men: While a story that is important to tell the film suffers from a script that is disjointed and unfocused with a score (while good on its own merits) that is disconnected from the events on the screen. I left the movie understanding the necessity of protecting buildings, sculpture, and art but without any real sense of how it really happened and what the reality of that protection looked like. Disappointing and more on the “reel” side rather than “real.”

One thought on “The Ordinary Extraordinary”