Have you ever been somewhere where it was clear that the residents had so much pride in where they lived that they defied expectations? Next time you are in New York, forget the Big Apple and head North to Buffalo and you’ll see how this city has wiped away the illusions of the so-called rust belt and are actively rebuilding and investing in the future rather that allowing others to write them off.

Nothing says this more than Buffalo Unscripted, a documentary by the National Trust for Historic Preservation (yes, my employers). Earlier this year three of my co-workers went up to Buffalo and interviewed over 500 people about the city in which they live. The result is an hour long documentary that not only pulled at my heartstrings, but also made me see possibilities where I might have previously dismissed it.

The power of place is a phrase embraced by public historians. It reveals how much of our shared past is connected to where we live, where we interact, and and where we dream. For ordinary Americans it is not the site of major monument or a historic house, it is our neighborhoods, our churches and temples, our restaurants, and our homes. The power of place is the grit and the polish of an urban and rural setting; or the civic parks and landscapes where we meet. The power of place is in its community.

Two weeks ago I was in Buffalo for the National Preservation Conference and got to attend the premiere of Buffalo Unscripted. For months I had been hearing about the beautiful buildings, the enterprising people and was excited to cap off my visit in a theatre full of Buffalonians listening to how important their city was to them.

It is easy to be proud of a place like New York City, which in the media and the world’s eye exudes cool. It’s the same for cities like Chicago, DC, Dallas, San Francisco which have a reputation based on a particular image and idea of the cities personality. For places “in decline” it’s an uphill battle. How do you hold on to that pride when others put you down? How do you encourage investment when no one is able to see the promise? I say you do it Buffalo style and paint your own picture of growth, your own vision of rejuvenation, and invest in yourselves in a way that that takes the cultural capital of the past and leverages into a very real future.

The people of Buffalo are saving their historic buildings, rewriting their zoning code, and rebuilding their neighborhoods one school at a time.

Through Buffalo Unscripted I found myself encouraged by those who have made their lives and homes in a changing city. For them, where they live isn’t limited to a single building or block, rather it is about making a dream reality for an entire city. The power of place is in Buffalo’s people.

For more information about Buffalo Unscripted visit www.buffalounscripted.org, or follow hashtag #bufunscripted on twitter. The full documentary will be online soon, until then enjoy this clip about “Buffalo in one word.”

Buffalo In One Word: Authentic from PreservationNation on Vimeo.

I am in #buffalove, and want to emphasize that if I could marry a building it would probably be the Guaranty Building. 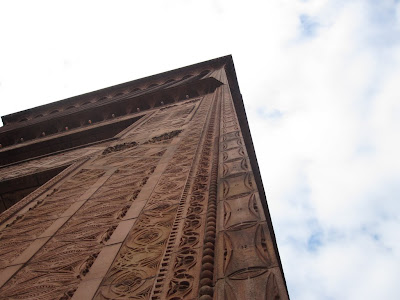 You can view the rest of my pics here, and keep an eye out for more on the National Preservation Conference next week!