“When we worked here together we fought, scratched, and clawed to make people’s lives a tiny bit better. That’s what public service is all about. Small incremental change every day.

Teddy Roosevelt once said ‘far and away the best prize that life has to offer is a chance to work hard at work worth doing.’ And I would add what makes work worth doing is getting to do it with people you love.” — Leslie Knope 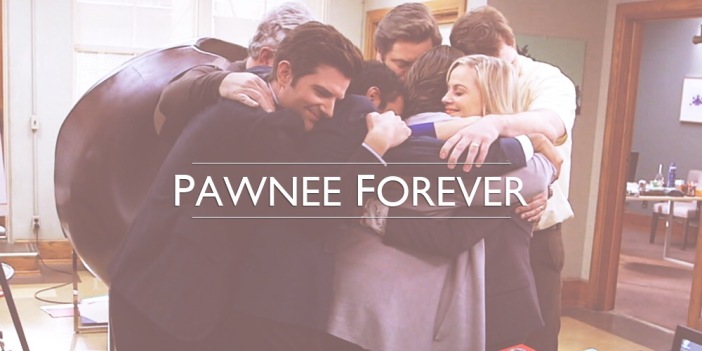 Yesterday we said goodbye to the loveable crew from Pawnee, Indiana and I literally got more emotional than I thought I would. And so, in the spirit of farewell, I pulled together my favorite things, moments, and thoughts from Pawnee, Indiana (with some helpful suggestions from my friends on Twitter and Facebook).

1. Leslie Knope. Though she started out a caricature, a female version of Michael Scott, she quickly grew into the dedicated, loyal, and intelligent person that you can’t help but identify with. Leslie wants everyone to be happy, and her enthusiasm was mostly infectious. While she taught us a lot of lessons one of her biggest legacies will be Galentine’s day. The day before Valentine’s Day where ladies celebrate ladies.

2. History at the local level. I will be the first to admit that Parks and Rec lovingly mocked the protectors of history, but as with most stories there was always a teensy bit of truth.

“We need better less-offensive history.” In Season 2, Episode 9 The Camel, we get a closer look at 1930s murals in the Pawnee Town Hall. This mural called the “Spirit of Pawnee” depicted stereotypes of various ethnicities in an incredibly offensive manner. At first glance the episode seemed to advocate for change, to remove the offensive images as an acknowledgment of their racism — but in the end the mural remained with only a name change “The Diversity Express” underscoring the ridiculousness and awfulness of the images depicted.

I thought the intervening mural competition did highlight how people connect to place.  Asking the questions with hilarious results: how would you depict the place where you live? What story would you tell?  The show was always great at highlighting this connection.

Another example: In the most recent season Leslie worked to create a National Park in Pawnee. Granted she tried to create it in a completely non-reality based way, but the sentiment remained. What I appreciated about that storyline was how she convinced the corporation, Gryzzl, to adopt a run-down part of town and to revitalize a neighborhood that was falling apart. It was a key part of the plan to convince them to rehab existing building stock instead of starting a new. My preservation heart forgave them for the earlier flaw and accepted it in the spirit in which the story was told.

The time Leslie tried to save a Gazebo at a historic house and chained herself to a fence. [Season 2, 94 Meetings] “History is important. You can’t just go around changing everything all the time. Otherwise the next thing you’ll know they’ll be painting the white house, not white.”

When she tried to change outdated laws in Season 5 and was met by a history buff who wanted to keep a tradition alive.

Or when they visited a historic house museum with fake objects. These moments may have made me shake my head, but they also made me smile.

4. Literally. My co-worker who shall not be named does a great Chris Traeger impression. As much as I loved Rob Lowe as Sam Seaborn. Rob Lowe as Traeger on Parks and Rec? Perfect. As for my co-worker? I will always have that day at the office where she performed a full, playing all the characters, interpretation, of this scene. It’s a classic.

5. Little Sebastian That tiny horse pulled at heart strings. He brought people together. So much of this town’s identity was wrapped up in strange festivals, rivalries with Eagleton, and bizarre relationship with its past. Sebastian exemplified how, in the end, the strange trip was all about making the community better, even with all the challenges.

Up in horsey heaven, here’s the thing
You trade your legs for angels wings
And once we’ve all said good-bye
You take a running leap and you learn to fly

So Bye bye Parks and Rec. There won’t be anything quite like you, ever again.

Please and thank you.