In the middle of last year a friend asked why we as a culture seem to be drawn to epic storytelling. These are stories where grand visions of what a world could be are garnished by the magical, the mystical, and the fantastical, spanning nations and many worlds. Stories where fights for truth and justice are disguised metaphors for what authors and readers see as missing from our current way of life. After months of letting the question circle around in my head I’d like to spend two posts presenting my answer largely based on musings from recent experiences and readings.

We’ll start with epic storytelling of the dystopian sort:

There was a moment in high school over a decade ago when I was tasked with reading post-apocalyptic books of all manner of styles. 1984, On the Beach, Fahrenheit 451 — each with their own set of rules and commentary on privacy, nuclear warfare, and censorship. I realized then that the dystopian fiction I am most attracted to are narratives with something to say beyond death, destruction, and warfare. I am also attracted to post-apocalyptic fiction that provides a commentary on choice. Stories that juxtapose our reality against a world we can barely recognize.

Two weeks ago I finished two books, The Bone Clocks and Station Eleven, that illustrate why some dystopian fiction enthralls me. They reveal how their ability to tell stories on a larger-than-life//larger-than-reality scale really hits home.

[Some over-arching plot spoilers below] 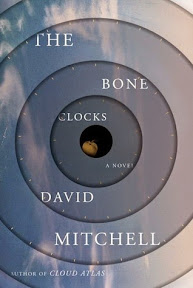 It begins when a young girl Holly Sykes runs away from home and finds herself an unwitting actor in a battle between individuals who are constantly reincarnated and others who feed on souls to obtain their immortality. The majority of the book is Holly living her life: falling in love, having a child, growing old. But the other world intersects at moments that feel unreal and surreal. Unlike most stories, this one does not end with the triumphal battle, but continues on an earth where human mistakes and human folly have destroyed the civilization we have created

In the last act Holly finds herself living in Ireland after catastrophic climate change and other forces have torn civilization apart. Her survival, not the fight of the immortals, becomes the central focus and we are brought to a world so very different then one we understand.

“Namely, that in order to write, you need a pen and a place, or a study and a typewriter, or a laptop and a Starbucks–it doesn’t matter, because the pen and the place are symbols. Symbols for means and tradition. “

To be fair, you don’t realize The Bone Clocks is a post-apocalyptic novel until you are nearing the end, but you feel as if Holly lives in a world teetering toward destruction. You care about her actions, her daughter’s actions and the actions of her friends. Everyone has to make decisions: Holly’s partner, a war reporter, chooses between returning to the front or staying at home with his family. Crispin Hershey, one of the novel’s narrators, get’s a fellow author, Richard Cheeseman, thrown in jail for drug possession due to an immature need for revenge over a review. He chooses to spend his remaining years trying to free Cheeseman from a Colombian prison but is unwilling to admit his own guilt to do so. Set against this mystical fight these choices become even more important. What is right, what is wrong? How do you fix a terrible error? Do you ever gain forgiveness, or reap rewards you deserve?

To some extent it’s all a giant allegory. That even amidst global change there are fundamental things that are important: love, family, health. And we find that even someone who saved the world from supernatural forces, still in the end had to give something up in order to set things right. 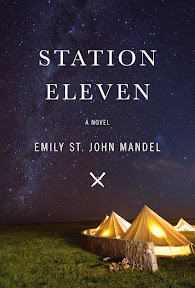 While I really enjoyedThe Bone Clocks, my love for Emily St. John Mandel’s Station Eleven is constantly growing. For one thing there is a hefty dose of Shakespeare throughout the novel, not to mention the staging of a world that has collapsed following a flu epidemic (something like 99% mortality) and as consequence we are treated with stories of survival and despair. Like the final chapters of The Bone Clocks those living in the world of Station Eleven are living in a world following the collapse of civilization as we know it.

“But what made it bearable were the friendships, of course, the camaraderie and the music and the Shakespeare, the moments of transcendent beauty and joy when it didn’t matter who’d used the last of the rosin on their bow or who anyone had slept with, although someone–probably Sayid–had written “Sartre: Hell is other people” and in pen inside one of the caravans, and someone else had scratched out “other people” and substituted “flutes.”

The book opens up during a glorious production of King Lear in Toronto, moments before a famous actor, Arthur Leander has a heart attack and dies on stage. In that moment, he becomes the invisible center of the book appearing and disappearing as we trace other characters in villages and towns, a traveling symphony, and at an airport turned museum, lives in the days and years before and after the plague.

“He woke at three in the morning, shivering. The news had worsened. The fabric was unraveling it will be hard to come back from this, he thought, because in those first days it was still inconceivable that civilization might not come back from this at all.”

Interwoven with these stories are descriptions of a comic book called “Station Eleven.” A story of a space colony adrift from Earth. Of a fight between Dr. Eleven and the people of the Undersea who wish to return to the Earth from whence they came. The book mirrors the larger story of a people isolated and unsure of what the future holds. Of a people making do with a new world order, unaware of who has survived, and what comes next.

I find that this set up allows the reader to connect with ideas of individual and collective memory. We see how artifacts of the years before the plague depict Arthur — gossip mags, unauthorized biographies. We learn how his own actions shaped those who were left behind following his death. On the flip side we have settlements after the collapse choosing to not remember the world that once was, while others create a Museum of Civilization — filled with laptops, silent phones and more. Individual and Collective memory.

Mandel manages to produce a book that highlights the need of humankind to connect with one another, to hold on to tangible pieces of a personal past while also revealing how tragedy can affect humans in myriad of ways. [Also Read: No More Avatars by Aiden Moher]

Epic storytelling of this kind is exhilarating. No, it doesn’t occur across many worlds and through space and time, but it does pile layers upon layers upon layers so that you are able to walk away with a sense of the vastness and value of life. This is not something easily accomplished in everyday fiction.

So. In my meandering way I return to the question at hand. Why epic storytelling? Because it makes connections and illustrates loss and the importance of life. It allows you to fathom the unfathomable, and to feel what life would be like stripped away of the clutter, the noise, and the trappings of modern civilization. In short to feel, in some sense, more alive than ever before.

3 thoughts on “Epic Storytelling: The Pull of Dystopia”