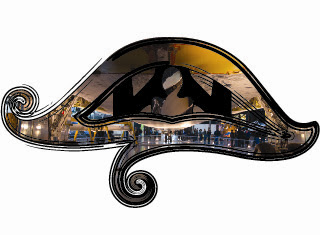 January has turned out to be a busy month. From moving to the Presidential Inauguration I’ve developed a long list of blog ideas, but not a whole lot of time to get pen to paper. So I thought I would let someone else write for a change.

In addition to being a friend of mine, Robert Cannon spends his free time taking photographs of places in DC and his other travels.  This time he decided to go closer to home and was inspired to share his story with me.

When I was young, my family would regularly visit the National Air and Space Museum in downtown Washington DC.  As a kid, seeing the technology and history on display at was awe inspiring. Nothing matched seeing the history of flight; from the Wright Brother’s plane, to The Spirit of St. Louis, to Apollo 11. Even to this day, the thirty seconds when a plane lifts off the ground and my stomach hits the floor fills me with an almost Rand-ian appreciation for human achievement. 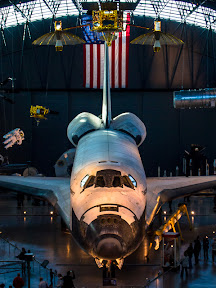 Years later, I’ve become an adult and some things have changed: I’ve graduated college, moved out of the state and then back again, and I’ve hit the big three-zero. Somewhere in that time (2003 to be exact), the Steven F. Udvar-Hazy Center was added as an annex to the Air and Space Museum near Washington Dulles International Airport, less than ten minutes from where I now live. Being a fan of the original museum, it’s surprising that it took me almost ten years to visit the new addition to the Smithsonian.

As an adult, seeing the display at the Udvar-Hazy Center is the closest I’ve come to repeating that childlike awe. The hardest part to describe is the sheer scale of everything. It’s almost as if the curators took everything that was too big to fit in the building in DC and stuck it in the Udvar-Hazy Center. Laid out like an airplane hanger, a plethora of jets, planes, and helicopters are arranged in a dense collection with the same breadth of history as the original Air and Space Museum. 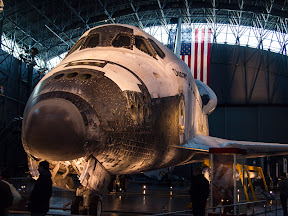 In addition to size, proximity is the other amazing quality of the display at the Udvar-Hazy Center. Visitors to the Museum are free to walk the floor of the building. The only barrier between the exhibits and the guests is a low guardrail about a foot high. It is designed with a mix-and-match format that probably allows for a configuration that is easily adaptable. On the flip side, it allows for the visitor to get really close to the displays. Several times I found myself literally under a larger than life (or at least larger than me) piece of history.

The combination of these two qualities, in my experience, is fairly unique for a public display. Most of the time it seems like there is only one or the other. Being able to both see these immense man-made structures and being close enough to almost touch them reminds me of being a kid again. 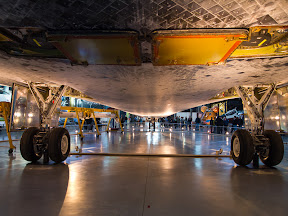 Unsurprisingly, the most extreme version of this was seeing the Space Shuttle Discovery. Added to the museum in 2012, it replaced the Enterprise, which now resides in New York City. At the tail section of the shuttle, the barrier allows you to stand completely underneath the shuttle. Standing there, looking at the immense size of it, my first thought was “I hope this thing doesn’t fall on me.” Of course, having flown to space and back thirty-nine times, more than any other space shuttle, my primary concern was that NASA couldn’t figure out how to have it sit in a stationary position on it’s own wheels…

Having seen the Udvar-Hazy Center, I can’t imagine what it must be like to see this display as a child. Being so physically close to the technologies that have shaped our past, it is incredible to see what is achievable. I hope the children who see Udvar-Hazy Center today are inspired to build something worthy of tomorrow’s Air and Space collection.

All images courtesy of Robert Cannon. You can read more from Rob at his personal website www.robpc.com, and he currently is blogging at TNG for the Next Generation.

One thought on “Guest Post: Re-Discovery at National Air and Space Museum”