At a moment when the outcome of our revolution was most in doubt, the father of our nation ordered these words be read to the people:

“Let it be told to the future world that in the depth of winter, when nothing but hope and virtue could survive, that the city and the country, alarmed at one common danger, came forth to meet it.”

America, in the face of our common dangers, in this winter of our hardship, let us remember these timeless words; with hope and virtue, let us brave once more the icy currents, and endure what storms may come; let it be said by our children’s children that when we were tested we refused to let this journey end, that we did not turn back nor did we falter; and with eyes fixed on the horizon and God’s grace upon us, we carried forth that great gift of freedom and delivered it safely to future generations.

Four years ago I stood, toes frozen to the ground, fingers numb, listening to the last phrase of President Obama’s first inaugural address as it rang through the crowd. It had already been a long day—waking at 4 am and walking from National’s ballpark to a spot right opposite the Smithsonian Castle—but I could feel the excitement, the pulse of the crowd, the mood of the masses. After all, most, if not all, had come to witness, to be a part of a moment in time when our county crossed a barrier that we weren’t sure we would ever cross. 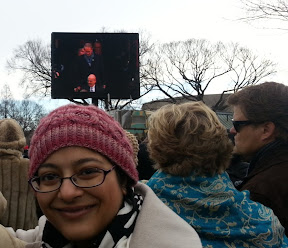 This year I got up a little later, with better shoes, and once again made my way down to the National Mall. Once again I found myself next to the Smithsonian Castle. Once again we took pictures, waved flags, and listened as the words boomed through the hundreds of thousands of people who had come to once again bear witness….

…And as we walked home I thought about the moment. I thought about my conscious decision to come down to the National Mall to be a part of this event. And I had to ask myself—what type of historical memory was I making?

Then more questions: Whatever memory this was, was it even real, or was it a fabrication? Was it one where I was forcing myself to be a part of a moment, that in its very nature, would be in the history books? Was I buying into the vocabulary of the occasion and creating a construct where I could, years from now, tell my children, and my children’s children that “I was there?” 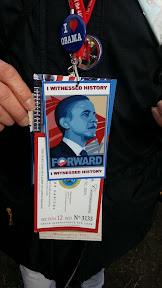 A few days later I read this piece by Jason Steinhaur on History@Work. He writes “What struck me was how much “history” seemed to motivate and validate people’s attendance. A desire to experience history motivated their pilgrimages, and when asked to reflect on the day, history validated their choices. It was fascinating to see how this rationalization continually surfaced in interviews. “

If Jason had interviewed me on the mall that morning I am a hundred percent sure I would have used the exact words, made that exact same assertion. I wanted to be present at a time and place where something historical was going down. I wanted to be a witness, to see something first hand rather than reading about it in a newspaper, or in a book, or seeing it from a far with the barriers of electronics and wiring and tubing. I wanted to be amidst the crowd, feeling wind on my cheeks, and the vibrations from the loudspeakers down to my very toes.

But if he asked me that night? I would probably have had a different answer.

After walking back to Foggy Bottom, I hustled over to volunteer for one of the Inaugural Balls selling official merchandise. While there I worked with a few individuals who had spent the last few months working on the ground to rally support for the Obama campaign, some who had graduated from college and immediately begun gathering support. As I listened to them talk, I realized that this moment was much more than a moment, it was the culmination of years of hard work—of dedication and long hours for something that they believed in.

So when I finally exited the convention center, long after the party goers, I realized the day had been transformed. Yes, I had started out wanting to be a part of something bigger than myself, a part of history, but it became a practical lesson about being a historian. 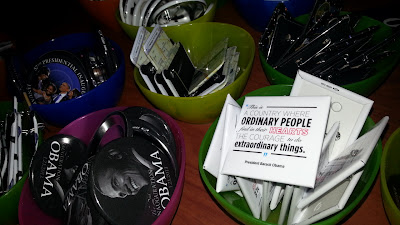 Our memories are all constructed by our experiences and our choices. They are linked to our yen for inspiration, our eagerness to be a part of a hope of greatness, to live in a time of meaning. This is a feeling that exists in every generation, every class, every community—no matter our politics or faith. As a historian it is my job to strive to understand those moments, those motivations, and to understand why people just like me, in years gone by, made the choice to stand, to gather, to live. As a witness to one aspect of that day I am now more self aware, and sure in my responsibility to see—and to document—so that others can understand.

My fellow Americans, the oath I have sworn before you today, like the one recited by others who serve in this Capitol, was an oath to God and country, not party or faction.

And we must faithfully execute that pledge during the duration of our service. But the words I spoke today are not so different from the oath that is taken each time a soldier signs up for duty, or an immigrant realizes her dream. 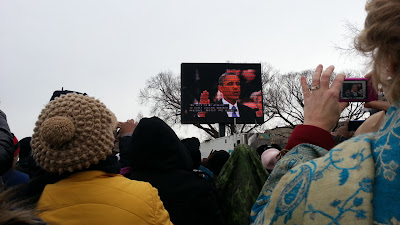 My oath is not so different from the pledge we all make to the flag that waves above and that fills our hearts with pride. They are the words of citizens, and they represent our greatest hope. You and I, as citizens, have the power to set this country’s course. You and I, as citizens, have the obligation to shape the debates of our time, not only with the votes we cast, but the voices we lift in defense of our most ancient values and enduring ideas.

Let us each of us now embrace with solemn duty, and awesome joy, what is our lasting birthright. With common effort and common purpose, with passion and dedication, let us answer the call of history and carry into an uncertain future that precious light of freedom.