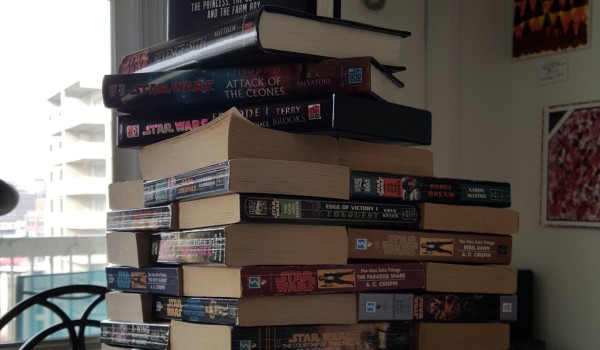 I can’t even.
Three days.
After a month of TV spots, interviews devoid of details but
full of excitement

I am self-aware that I am a willing consumer
For what is, on a very granular level,

But we all know there is something more.
Something deeper.
Something beyond. Something Magic. Myth-Creation.

Four.
Two droids in a desert world
A Dreamer.
A Cynic.
A Failure (though we don’t know it yet).
A Leader.
A Walking Carpet.
Watching as a world turns into fragments
Looking for a reason to go on. A New Hope.

Five.
For me a masterpiece, brilliance.
We step into a larger world.
One filled with adventure and terror.
Where the odds are three thousand seven hundred and twenty to one.
Where love, connection, and
A yearning to belong all collide
In a city passing through clouds.
I love you. I know. Father. The Empire Strikes Back.

One.
A flashback. The father, a boy, a dreamer.
(Sound Familiar?)
A slave.
Maybe we can’t forgive the acting. Or the endless podrace.
But there is a vision. A glimpse. A Duel of the Fates.
The boy escapes. Sees new worlds. Starts a war.
Meets a girl. All puppets of a Phantom Menace.

Two.
Politics. A marriage.
A Queen turned Senator
Slowly losing her heart
As the Republic begins to fall.
But we’re in a mystery. An army out of thin air
Right when it is needed.
And we watch, all the while knowing the ending.
The tragedy. As Palpatine inches forward
Using words to cultivate, manipulate, and demonstrate
How the Dark, biting shadows, may be more powerful than the Light
During the Attack of the Clones

Three.
I know its not for everyone. But I see it as a study in building tension
A Senator. A Jedi. A Mentor. A Sith. Circling. Circling. Circling.
Power for power or power to save lives.
One step at a time Anakin shifts and the line has already been crossed.
Wanting more, but losing everything.
And as Padme dies, we mock the breaking of her heart.
For the words, in their simplicity, forget that she was so much more than his.
The Jedi fall. A Brother falls. Liberty falls. And an Empire rises
In the Revenge of the Sith.

Six.
Always two there are. Luke. Leia. Siblings after all.
Was there good in Vader? Does it matter?
Yoda fades away and they go to fight
Another mechanistic monster on a planet
Of lush green, towering trees
And teddy bears.
The truth is hard. And evil still taunts, manipulates, controls
But a son has faith. He believes he can do the impossible.
Not save people from dying, but provide freedom
From self-created chains.
And he does. While Leia takes down a shield, and the Falcon soars.
The Rebellion prevails.
In Return of the Jedi.

Seven.
Right now. At this moment. All I have are names.
Rey, Finn, Poe, BB-8, Jakku, First Order, Resistance
Captain Phasma, Kylo Ren
Thirty years have passed. Leia is a General.
Han is a believer…and Luke? I have my own hopes
And fears.
But I know I want that moment of wonder.
Of an endless Star Destroyer
But will settle for a little nostalgia
Prepare for sorrow
And be ready for the spinning of stories
For years and years to come.

One thought on “Three Days, Six Movies, and Stories to Come”