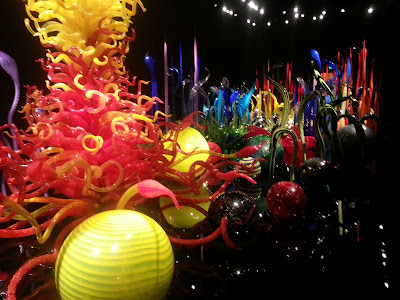 I started, in a sense, with the history. On the recommendation of many people, I took the Seattle Underground tour where I gained a sense of a city that changed after a disastrous fire. Following the fire, the city was raised about 15 feet, creating subterranean passages with skylights that filtered in light from the sidewalk above. Piece 1. 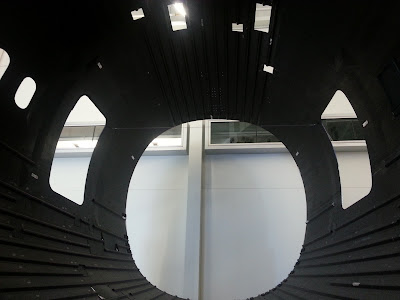 View of the 787 Dreamliner Composite Shell at the Boeing Factory

Pushing forward in time, I spent a few hours at Seattle Center, home of the 1962 World’s Fair. I took the obligatory ride up the Space Needle where, like at any high point in a city, I gained a visual sense of the city’s geography — water and land, ships and sky. Piece 2.

The cool thing about Seattle Center is that it is also a mecca of museums. Science. Art. Music. Pop culture. There is something here to feed all matter of interests. Luckily, for a few extra bucks, my ticket up the Space Needle also came with entry into the Chihuly Gardens and Glass exhibition next door. Now for those of you who aren’t familiar with Dale Chihuly’s work, it’s … phenomenal. His work with glass is indescribable — the shapes, the colors — and you can tell that he takes some of his inspiration from Washington state itself, from sea life to Native American baskets. Piece 3. 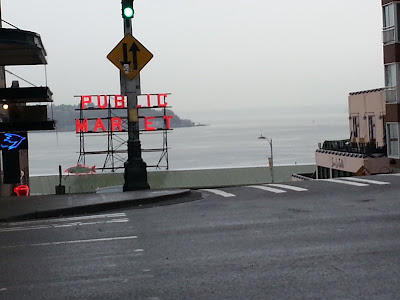 After a tour of the Icons of Science Fiction exhibition at the EMP Museum (designed by Frank Gehry) I stepped into even more recent history — a narrative about the band Nirvana. Amidst their story is a broader examination of the DIY music movement. Using its extensive collection of sound samples, the exhibition talks about the role of Seattle and Washington State in the alternative music scene — letting visitors listen to a wide array of predecessors to Nirvana, other bands that were contemporary to the band, and those that Nirvana influenced. Piece 4.

I took a walk around the neighborhood wandering through Pike Place Market, the Seattle Public Library, and Pioneer Square. The library alone intimated a city filled with creativity; the Market and Pioneer Square were fixtures of a community. Piece 5.

And finally, by staying in the suburbs I got an idea of the role Microsoft and Boeing play in the region’s economy. Seeing the planes being put together — wing, engine, tail, body — provided one more example about how pieces come together into a cohesive whole. Piece 6.

As I rode the train to Spokane, I thought about the city I experienced and saw each of these six pieces came together into a single snapshot. As visitors to a city, our visions of what that place is and what’s important in that space depends on the connections we forge. Being able to see the magic of Chihuly next to the vibrations of Smells Like Teen Spirit while smelling the fish and eating doughnuts in the market gave me a picture of a place that I won’t forget. This was my Seattle.

You can view my full Seattle and Spokane Album here.

One thought on “Putting the Puzzle Together: Reflections on Travel in Seattle”